Sights in the island of Zakynthos

Some of the best Sights in Zakynthos

The list of places worth visiting in Zakynthos is unending. Admire the amazing view from the traditional lighthouse in Keri and Korithi, sun bathe on the serene untouched Gerakas beach chosen by the endangered Caretta Caretta turtle itself, swim in the crystal clear and cool waters of remote rocky sea points like Porto Roxa and Porto Limnionas, enjoy the water on the small scenic pebbly beach of Porto Vromi, overlook the conical white rocks called Mizithres sticking out of the sea at the deepest point of the Mediterannean, sit in awe of the old church of Skopiotisa or dare to dive off the little island of Korakonisi and enjoy the beauties you will discover underwater. Below are the sites Zakynthos Island is most famous for described in more detail. Be sure to allow yourself the fantastic and unforgettable experience of visiting them. 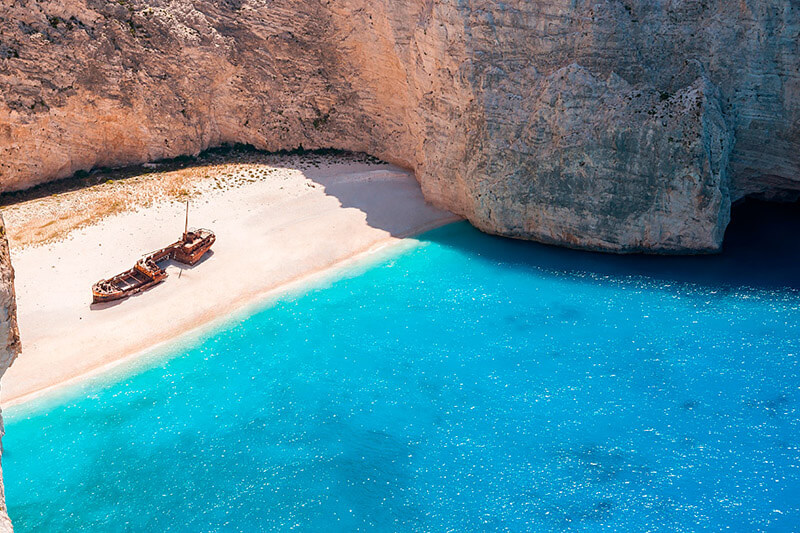 One of the most photographed beaches in the world is the Shipwreck, also known as Navagio in Greek. It is a white pebbly beach surrounded by white cliffs and the water in all kinds of amazing shades of blue. It owes its name to a boat that got shipwrecked on this remote beach while trying to get away from the Greek Navy. It was smuggling contraband cigarettes but fortunately none of the crew was hurt.

The Shipwreck cove is only accessible by sea. There are many organized excursion that visit this beach from Zakynthos town, Alykes, Skinari and elsewhere. You can also admire the Shipwreck from a distance if you visit the platform right over it in the village of Anafonitria.

Whichever you pick do not miss this unbelievable site! 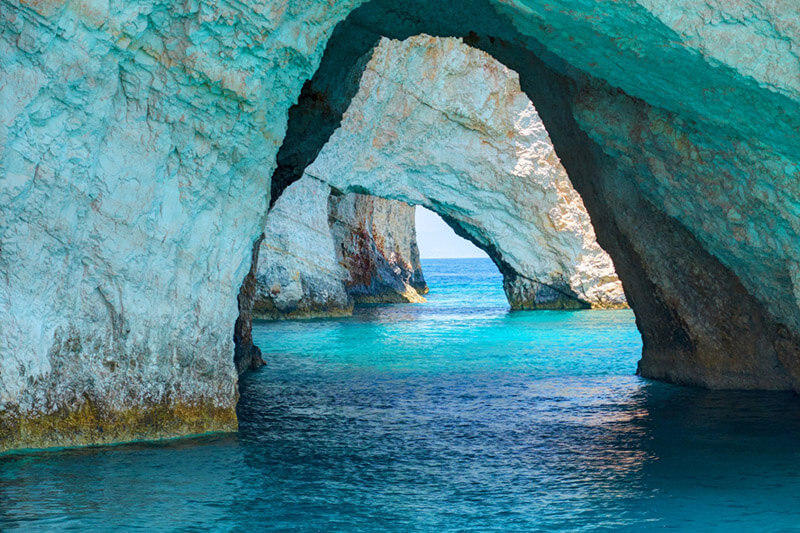 A site Zakynthos is known for worldwide are the rare Blue Caves. Situated on the north of the island, they were discovered in 1897. The largest cave is called the Blue Grotto. The name derived from the unbelievable shades of blue that cover the caves and the waters within and around them. It is a truly spectacular experience not to be missed. The caves are only accessible by boat. There are many organized excursions in order to visit the caves. The nearest boat departs from the port of Saint Nicolaos, near Volimes village. The crystal clear waters are also ideal for snorkelling. 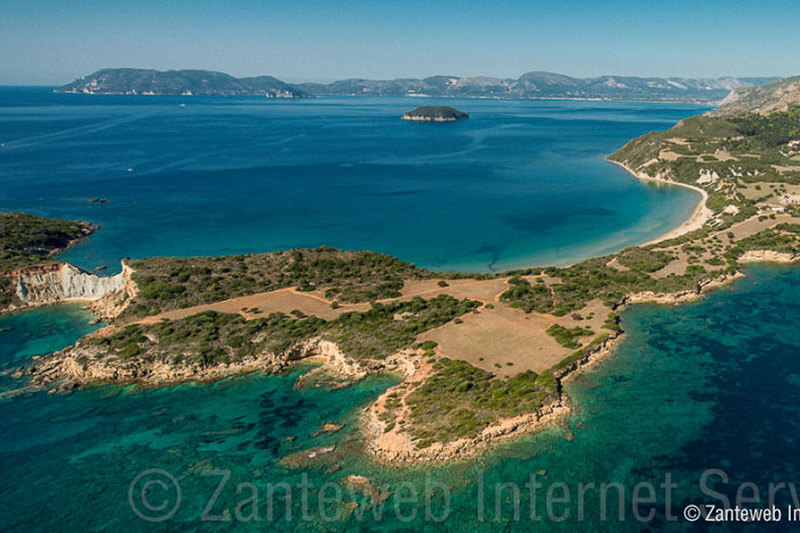 The National Marine Park of Zakynthos (N.M.P.Z.) is situated on the southern most part of the island. The Presidential Decree for its establishment was signed on the 1st of December 1999 by the President of the Greek Republic. The Marine Park's objectives are the preservation of the natural environment and conservation of the ecological balance between the marine and coastal area of the Laganas Bay and the Strophadia Islands. In the Marine Park area is where the endangered loggerhead sea turtle Caretta Caretta nests and lays eggs. The National Marine Park of Zakynthos is the first of its kind in Greece comprising of a Management Body and an example for other areas requiring integrated management.

The Marine Park includes the marine area of the Laganas Bay, the Caretta Caretta nesting beaches and a zone of land adjoining them, the wetland of Keri Lake and the two small islands of Strophadia located 25 miles south of the island of Zakynthos. Greece is the only European country where the loggerhead sea turtles Caretta Caretta nest, with Zakynthos being the most important nesting area in the Mediterranean. What’s more, the area is characterized by a variety of habitats of European interest including sand dunes, Posidonia Oceanica beds, the critically endangered Sea daffodil (Pancratium maritimum), submerged reefs, as well as hundreds of species of flora and fauna, some of which are of great importance. It should also be noted that a resident population of the critically endangered species of monk seal Monachus Monachus is present on the west coast of the island.

Within the marine area of the Park there are three zones: 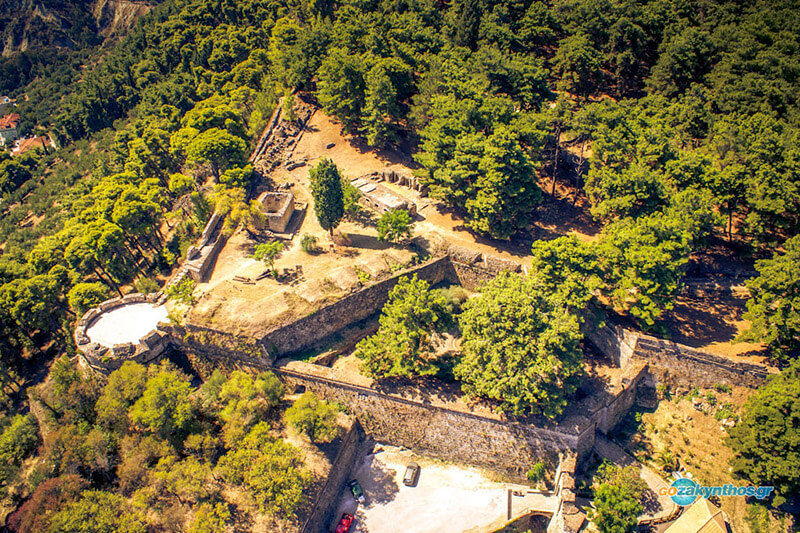 Bohali hill is located on the outskirts of Zante town. There you will find the ruins of the old Venetian Castle. The entrance gate has the Venetian symbol “The Lion of Saint Mark”. Built in 1480, part of it was destroyed by invading Turks shortly after. It was repaired from 1514 and became the capital of the island for a brief time. On the same location, there once stood an acropolis. The castle is surrounded by pine trees offering tranquility, as well as a beautiful view of Zakynthos town, the Ionian Sea and the Peloponnese. 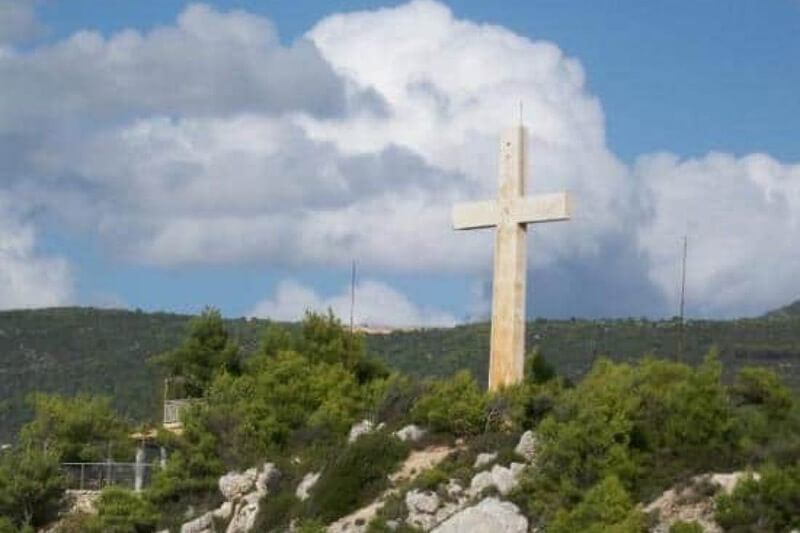 In the mountain village of Kambi, on the cliff called Shiza, you will see a huge cross. It was built in the memory of all those lost during the Greek Civil War and World War 2. The view from this point is astonishing and it is favoured by many in order to admire the sunset on one of the cafes and traditional tavernas in the area. 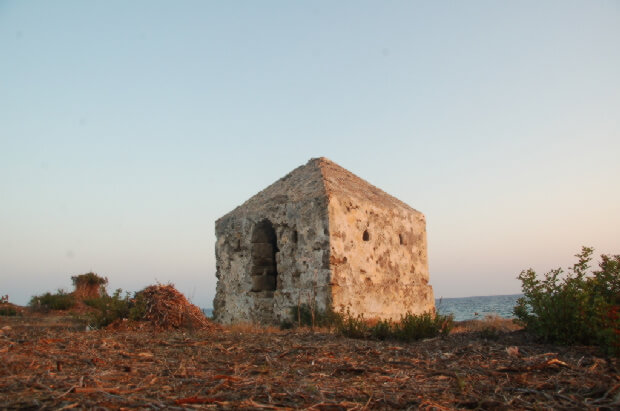 On the north part of Tsilivi beach you will see a Venetian “Vardiola”. It is a stone built outpost that was used as an observatory in order to let the locals and the authorities know when enemy ships were approaching. It is still standing after all these years and is well worth the visit. 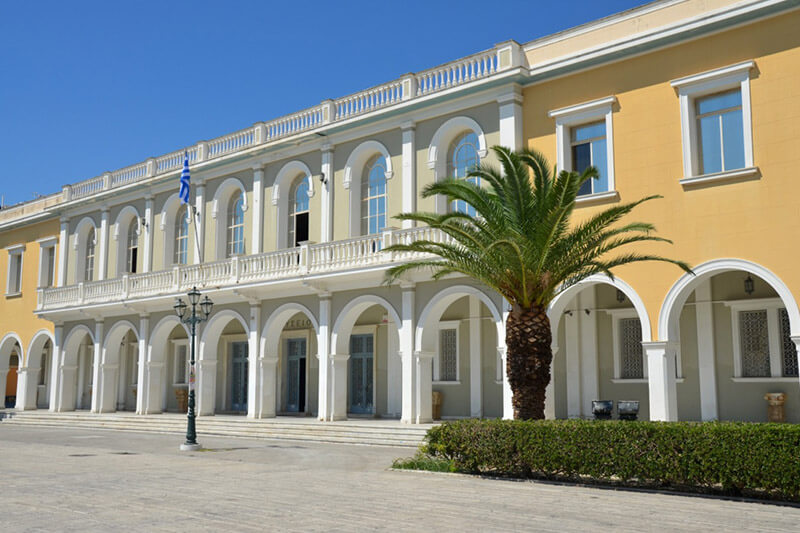 Zakynthos is an island with a rich history. This is obvious from the many museums. The Byzantine and post Byzantine museum has many interesting exhibitions and the Solomos and Kalvos museum has many of the personal artifacts of these two famous Zakynthians and other prominent ones. There is also the museum of Grigorios Xenopoulos, a famous play writer and journalist that features original manuscripts, furniture and personal items. On Bohali hill you will find a Naval Museum that has the reputation of the best collection of Byzantine Vessels worldwide. You must also visit the Vertzgio Folk museum in the village of Pigadakia which is a reconstructed traditional Zakynthian manor furnished and decorated with original Zakynthian pieces. 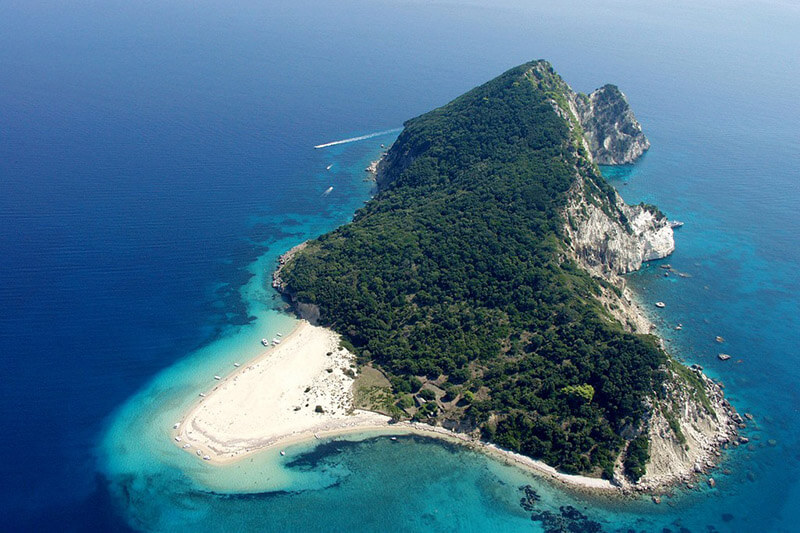 There are two beautiful small islands off the coasts of Zakynthos worth visiting: Marathonisi and Pelouzo Island.

Marathonisi is located in the gulf of Laganas, across the coast from Keri. It is protected by the National Marine Park as it is a breeding area for the endangered Caretta Caretta turtle. It is rich in vegetation and has two beaches, one with sand and one with pebbles as well as some caves. You can visit the island for a limited time frame so the island never gets crowded, but only during the day. The island resembles the shape of a turtle and it is also called Turtle Island. There are no shops, but there is usually a boat that sells drinks and snacks.

Pelouzo Island is situated within the Laganas Bay, 2 nautical miles far from the opposite beach of Daphni. It is also protected by the National Marine Park because of the turtles and rare fish that live in the area. It is accessible only by swimming (about 2 hours from the beach of Dafni), dingy or canoe. The island is slightly mountainous with one beach, a cave and the ruins of a building. Overnight stays are forbidden.